01952 459900
We wanted to take this opportunity to remind you of our opening times during the Covid 19 Pandemic.

Appointments for Bicycle & Tandem orders available on Saturdays by prior booking.

Zena and her 80’s Swallow MTB! 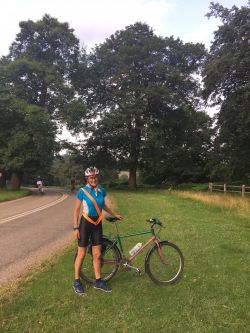 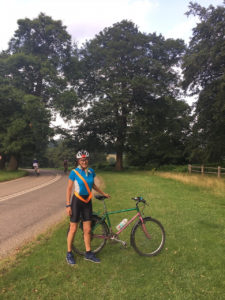 #tbt this is Zena who won a competition back in the 80’s and the prize was a Swallow Bespoke Ptarmigan Mountain Bike, one of only about 50 made by hand back in the early days of mountain biking! She still rides the bike frequently, seen here training in Richmond Park between cycling adventures. It’s great to see our quality hand made bikes still going after many years and miles…that’s the beauty of hand made! Considered design, lovely materials, attention to detail and care in manufacture! #cycling #cyclinglife

This is Zena’s ride story!

I worked for the Royal Institution of Chartered Surveyors (RICS) who had an international cycle club (run by the French) called Eurocycle, and each year they did a cycle ride of around 1,000km over 6 or so days  – as a group of keen cycling people from countries including: Mexico, Spain, Germany, France etc.  Trips included:  Frankfurt to Rome, Maastricht to Monte Carlo, a trip all along the Loire from Aubernas in the West to Nantes in the East.
They asked me if I’d like to join them, so I thought – that sounds good and started training – without looking at the map – I just trained, on the Ptarmigan as this was my only bike – around Richmond Park.
My darling Mother (who sadly passed recently), when I mentioned the idea to her – said ‘what a great idea’ and promptly ordered industrial supplies of Frusli Bars for me which I took and ate continuously (we needed a huge number of calories due to the steep hills and the heat – so ‘over- eating was a necessity)
The day for the trip came, I turned up at the UK airport with bike, to meet the the team (all males) and off we flew to France to start the trip – which I knew included the Alps. Needless to say I didn’t look at the map, I just trained and trained… what is the Nike saying.. ‘Just do it’.
When I arrived in France to meet everyone – they said ‘ah Zena, do you have another bike’?  To which I replied, no.  This is my bike – knobbly tires and all.
They all had racing bikes, spare bikes (in the case of the German an identical spare bike – same colour, make etc which amused me),  carbon fibre bikes the lot.
But I was fit.  And I hadn’t read the map and seen what was coming..
My Ptarmigan bike didn’t have one mechanical failure in the entire trip – unlike their bikes – but then they had spare bikes in anticipation (ha ha).
Various things happened to us, including the roads melting in places because of the extreme heat – it was June – and we had to use petrol to get it off the tires.
Each night we stayed in small hotels (thank goodness – so at least we were’t camping…
Each night we would have supper together and discuss the next day’s ride and what had happened that day.
One night they started showing the incline for the following day and talking about Alpe d’Huez  – which meant nothing to me.  They weren’t being patronising, at all, but they said, listen Zena it’s really tough, if you want you can easily go around the base and anyone else can for that matter.  I said words to the effect of ‘oh it’s fine’ ‘I’ll give it a go’.
Well, it was a 100km ride just to reach the base, at which point a storm had broken out — with hail stones – I was on my own as some had given up and the keen ones were already at the top.  I found a car garage in he village and asked if they had any clothes I could borrow, and they kindly gave me some jeans which they cut up and stapled to my cycle shorts (really).  And off I went.  I just put the Ptarmigan in a low gear and kept going.  I noticed that there seems to be a lot of bends and cars coming the other way stared and honked at me.  After a while, some of the gang drove down in a car,  winding down the window to say, ‘we’ve come to get you’ and I said, ’ it’s fine’, I’ll just carry on.’   And asked what the numbers on the road meant (they fudged that answer as it was the number of bends and they didn’t want me to give up).  I got to the top to the  hotel and had a lovely hot bath and a big whisky!
Many other adventures have taken place with the bike, but this one gives a flavour ;+
Testament to the Swallow Cycles ‘Kit’ !  And the fact that in my case it’s best to train and train and then ‘just do it’ as opposed to putting yourself off by checking out the route and the inclines and spot heights!
– Zena.

We are continuing to operate a Covid Safe environment. We have taken great care over the period with none of our staff contracting Covid.

We still value the safety of our staff and customers and will continue to request that masks are worn and that we keep social distancing to 2 meters while in the shop and showroom.

This will not inconvenience either party. However, it will ensure that as a small business we do not have to close if one of us is exposed to Covid.

We trust that you will understand and respect our decision.

Appointments for the discussion of Bicycles, Tandems, or E-bikes are available, just call to make an appointment.