Saving our Arts and Crafts in the Ironbridge Gorge!

Written by Pete on 12th August 2019. Posted in Uncategorised. 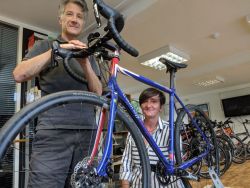 Experts believe more than 200 heritage crafts are at risk of becoming extinct in the UK, and the battle is on to save some of the crafts indigenous to the Ironbridge Gorge and stop them disappearing forever.

Rob and Pete were recently interviewed by Shropshire Live regarding the Festival of Imagination in the Ironbridge Gorge from the 14-29 of September. We will be attending the festival, so watch this space! The festival is celebrating some of the UK’s dying Arts and Crafts (red list crafts)…many of are still practiced with expertise, love and care in The Gorge today!

The Festival of Imagination, to be held at the world-famous Ironbridge Gorge from September 14-29, will be showcasing some of the red listed crafts still being practised in the area so people can see how they can prevent traditional skilled crafts such as metalwork and coracle making from dying out.

The second Heritage Crafts Association Red List saw the amount of heritage crafts which are endangered rise from 169 in 2017 to 212 in 2019. These are traditional skilled crafts which are at real risk of disappearing.  At the Ironbridge Gorge, the only UNESCO World Heritage Site in the West Midlands, there is a real pride in its historic crafts which even include bicycle-frame making, ceramics and pottery.

Mary Lewis is the Endangered Crafts Officer for The Heritage Crafts Association (HCA) and is responsible for pulling together the Red List. “These endangered crafts are part of our cultural heritage,” she said. “We have this bank of knowledge and skills to be able to make all of these different products. “Eventually, without these skills, our built heritage will start to deteriorate. We have been traditionally very good in this country at preserving our built heritage, but very poor at maintaining the skills and knowledge of the crafts and techniques behind it. “Ironbridge was traditionally a hotbed for skilled trades in things like metalworking and ceramics.”

Prince Charles is the President of the HCA and has been vocal in his support for endangered crafts, and the importance of keeping them going, something which will be relayed on September 21 at the big Yurt at Dale End Park.  In a foreword to the Heritage Craft Association’s first Red List of Endangered Crafts 2019, the Prince said: “I have always had a particular admiration for those craftspeople who can strike the delicate balance between producing work that speaks to the needs of the present, while honouring a lineage of practice stretching back into the past.  “These craftspeople not only fulfil the role of makers of local and sustainable products – as important as that is in an increasingly globalised throwaway world – but they are also stewards of living traditions, protecting and passing on legacies of knowledge and skill that will, with hope, be treasured and put to good use by succeeding generations.” The HCA is aiming to get more people to support for heritage crafts by encouraging people to sign up and support the crafts on show at the festival – and with between 9,500 and 12,000 people expected to attend there is sure to be plenty of interest.

Mary said: “At the Festival of Imagination we want to make more people aware of the Red List and what some of the crafts are. It’s a good opportunity for people to learn about endangered crafts, but also it’s good for the craftspeople to demonstrate themselves and their work. “The more members we have, the more support we can give to endangered crafts. “We also hope to promote some more viable crafts too like wool spinning, because if they don’t get support then they won’t stay viable.”

One business in the Gorge which is still successfully continuing an endangered craft is Bicycles By Design run by Peter Bird and Robert Wade. Over the past 38 years they have won many awards for their products and designs. Both Peter and Robert are two of only about 15 to 20 craftsmen in the UK making handmade bespoke bicycle frames – and will be displaying their craft at the Festival of Imagination. “There is no specialist training, you can’t go to frame building school, you either have to be an apprentice or you teach yourself,” said Robert. “There are quite a lot of people playing at bicycle frame building but not many doing it as a practicing craft. Those who do it full-time use some of the more difficult materials to work with such as stainless steel – a lot of people who dabble in it are not skilled enough to do.”

As well as running a successful business from making bicycles and tandems, Peter and Robert also run workshops at Coalport on how to build a bike frame, however, this does not translate into people using the skills for a trade. “The thing is that 99% of the people doing the courses are doing it for the experience of building their own bicycle frame – they have no intention of going into business,” said Robert.  “The reason for that is the market is tiny. There are only about 450 purely bespoke handmade frames built a year.”

The Festival of Imagination, which runs from September 14-29 is about not only looking at the heritage and past but also celebrating the present and looking at what the area can contribute in the future.  Heritage crafts also need to keep up to pace with technology such as electric bicycles, believes Robert. “Technology has moved forward. Batteries and motors for bikes have got smaller and more efficient, so being able to incorporate that into a bespoke frame is something that is going to be very important in the future,” said Robert.  “It’s a traditional craft that has evolved to prevail as a viable proposition.” Mary Lewis added: “We are not just about a nostalgic view at a dusty past, we are about businesses like Bicycle By Design who use hand skills, building on a long tradition of hand-built bicycles, but making a very contemporary product. These crafts can exist alongside future technologies.”

Read the full article via Shropshire Live at: https://www.shropshirelive.com/features/2019/08/08/shropshire-festival-fighting-for-endangered-crafts/