Cycling and Votes for Women

Written by Pete on 6th February 2018. Posted in Bicycles. 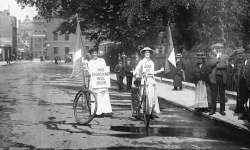 Cycling and bicycles were used by the Suffragettes to spread information during the votes for women campaign.

The bicycle was seen as a symbol of woman’s emancipation. The American civil rights leader, Susan B Anthony, wrote in 1896:

“I think [the bicycle] has done more to emancipate women than any one thing in the world. I rejoice every time I see a woman ride by on a bike. It gives her a feeling of self-reliance and independence the moment she takes her seat; and away she goes, the picture of untrammelled womanhood.”

The whole of the Pankhurst family were prominent members of The National Clarion Cycling Club, a cycling club set up in 1894 to promote Socialism and healthy activity for working class people.  Although there were some male detractors of women’s enfranchisement, in part because they feared it would weaken the case for working class men’s rights. The Clarion was one of the very first cycling clubs to admit women members when it was formed and does to this day still have a very large female membership.  Some quite prominent cycling clubs didn’t allow full membership for woman until the 1960s!!

Although voting rights for all woman didn’t come until 1928: there is still a lot to celebrate today – the first votes for some woman and full voting rights for working-class men. And in no small way, all helped by bicycles and the Clarion Cycling club.