01952 459900
Visiting us on a Saturday?
We operate an appointment system on Saturdays so specialist staff can deal with your needs. Please BOOK here.
If you are dropping off or collecting your bike there is no need to book.

Written by keith on 5th March 2020. Posted in Uncategorised. 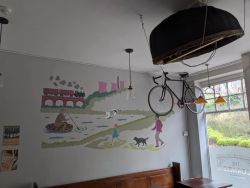 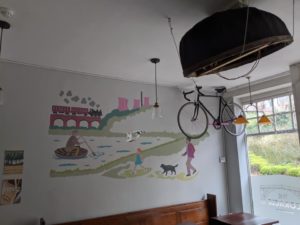 Check out this amazing mural in the Coracle, Micropub, Ironbridge featuring one of the earliest Swallow Handmade Bicycles made by Pete. The mural celebrates transport in the Ironbridge Gorge and features the Gorges rail history, walking along the Severn, a Coracle and the famous, now gone Cooling Towers of Buildwas. Local artist Rod Sheppard has echoed the coloured cranks on the bike with the Cooling Towers colour to draw the bike into the painting. The bike was made in the early 80’s and it’s amazing to see it included in this mural that celebrates the heritage of travel in the Gorge. #cycling #cyclinglife #art #mural #ironbridge #coracle #ironbridgegorge #shropshire #micropub @bicyclesbydesign Swallow Bespoke Bicycles